THE PEOPLE DOWNSTAIRS
By Natalie Symons

A World Premiere three years in the making.
After an extended pause from the COVID-19 pandemic, THE PEOPLE DOWNSTAIRS by St Pete playwright Natalie Symons, who developed this play at American Stage, finally gets its world premiere.

21st Century Voices: New Play Festival – Mainstage Selection
In Buffalo, NY, aging funeral home custodian Miles lives with his middle-aged daughter Mabel, who spends her days writing letters to prison inmates. When a court-appointed guardian threatens to take away their home, Miles sets out to set Mabel up with Todd, an inept mortician. It is a father’s fierce determination not to accept his daughter’s fate that ignites an endearing human comedy about love, loss, loneliness and the healing power of laughter.

“We are over the moon to be bringing back this tremendous show and giving it the true World Premiere that it deserves,” said Associate Artistic Director Kristin Clippard. “The set of THE PEOPLE DOWNSTAIRS has stood like a ghost in our theater for 16 months and the lights will finally shine on this delightful story. It’s the perfect comedy, centering on an isolated father and daughter, to warm your heart and make you laugh out loud. With other people!”

Due to the rise in positive cases of the COVID-19 virus, the following protocols will be in effect for the health and safety of our artists, staff and patrons.

THE PEOPLE DOWNSTAIRS Program Can Be Seen Here

Sara Oliva* (Mabel Lisowski) is thrilled to be returning to American Stage, where she was last seen as Church Lady in BETWEEN RIVERSIDE AND CRAZY. Other Florida credits include: Church Lady in BETWEEN RIVERSIDE AND CRAZY (GableStage), MY NAME IS ASHER LEV, A VIEW FROM THE BRIDGE and TOP GIRLS at Mad Cow Theatre, Helen in BORN YESTERDAY (Maltz Jupiter Theatre). Other theaters include Alhambra Theater, Orlando Fringe, Orlando Shakespeare Playfest. Chicago credits include: Northlight Theater, The Lyric Opera of Chicago, Bailiwick Repertory, Mary-Arrchie Theater, Lifeline Theater, The Artistic Home, and others. New York credits: Shakespeare in the Parking Lot’s CORIOLANUS (NYT Critics’ Pick), Vagabond Productions’ (Belgium) American premiere of MISS JULIE, The Drilling Company, HERE Arts, Dixon Place, Fringe NYC, Berkshire Theater Group and Double Edge Theater. She received her M.F.A in acting from Brandeis University. Love to her mother and Azzurra. www.saraoliva.com

Don Walker (Miles Lisowski) was last seen at American Stage as Leonato in Ben Ismail’s production of MUCH ADO ABOUT NOTHING. In Sarasota, Don performed often for Banyan Theater Company, including PAINTING CHURCHES (with favorite costar Jenny Aldrich), as well as directing. Other credits include roles at Asolo Rep, Golden Apple Dinner Theater, Florida Studio Theater and Theatre Odyssey. He was in the Dog Days productions of DOUBLE INDEMNITY and THEOPHILUS NORTH at the Cook Theatre. At Westcoast Black Theatre Troupe he is slated to appear as a corrupt judge in the premier of RUBY, a musical retelling of the mystery surrounding a 1952 murder in Live Oak, Florida. Look for him in April in the Sarasota Jewish Theater’s production of TUESDAYS WITH MORRIE.

Teri Lazzara (Shelley Williams) is a Seattle actor and is pleased to make her first appearance at American Stage Theatre Company. This is Teri’s second time around in a Natalie Symons play, having originated the role of Thelma in LARK EDEN at Seattle’s Theater Schmeater (where she served as Managing Director for six years). Favorite Seattle roles include Emma in Theatre 22’s ANNAPURNA, Barbara in Balagan Theatre’s AUGUST: OSAGE COUNTY and Collette in Moonlight Theater Company’s FOUR DOGS AND A BONE. She has worked on many Seattle stages including Annex Theater, Book-it Repertory, MAP Theatre and Sound Theatre Company. Teri has participated in many festivals of 14/48: THE WORLD’S QUICKEST THEATER FESTIVAL (www.the1448projects.org) and is the proud recipient of their Mazen Award. Teri has two cats (Brenda and Collette) and a boyfriend (Alex) waiting for her in Seattle.

Matthew McGee* (Todd Schneider) is excited to return to American Stage where he has performed in numerous plays and musicals since 2006. Recently, Matthew appeared in the series “Life’s Rewards” now streaming on Amazon Prime and as a featured voice actor in freeFall Theatre’s THE ROSE AND THE BEAST. A celebrated drag performer, Matthew is a 3 time Best of the Bay Award Winner (Creative Loafing) and has worked with Walt Disney World, The Asolo Rep, freeFall Theatre, American Stage, St. Pete Opera Company, The Hippodrome and Stageworks. Up next: In 2022, you can see Matthew in FATBOY (freeFall Theatre) and as Hercule Poirot in MURDER ON THE ORIENT EXPRESS (Stageworks) IG: @thematthewmcgee 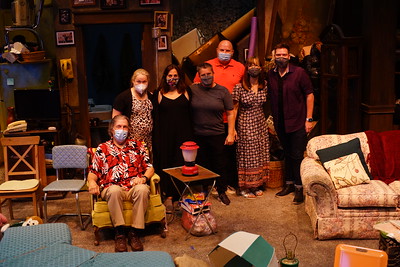 Spotlight Series: CHATBACKS | Sunday Matinee, Sept. 19, Friday, Sept. 24 and Thursday, Sept. 30
Stick around immediately following select performances to chat with artists and other audience members about the play, the characters and the ideas aroused by the production.
Free for THE PEOPLE DOWNSTAIRS ticket holders.

Behind The Curtain- Podcast