A RAISIN IN THE SUN

“A milestone in the American Theatre.” -Ebony

WE THE PEOPLE…WILL NOT HAVE OUR DREAMS DEFERRED

Lorraine Hansberry’s groundbreaking family drama is the first play in our American Legacy series. Dedicated to modern classics that lend historical perspective to stories from our past, this series seeks to draw a connection between our culture’s history and the events of today.

In pursuit of the American Dream, the dynamic Younger family wrestles with the push to assimilate into a white Chicago neighborhood, and the pull of their cultural roots. These opposing forces both unite and divide the family, as each grapple with the social issues that challenge their identity – and the personal choices that will determine their future. This story of hope and inspiration remains universally relevant more than 60 years after it first hit Broadway.

SHERYL CARBONELL* (Ruth Younger) was recently seen as Rose in FENCES (Mad Cow Theatre). Other regional credits include Calpurnia in TO KILL A MOCKINGBIRD understudied and performed roles of Cleopatra in ANTONY AND CLEOPATRA, and Cassandra in SONIA, VANYA, MASHA AND SPIKE (Orlando Shakespeare Theatre), Reba in YOU CAN’T TAKE IT WITH YOU and Stepp Sister in DREAMGIRLS (Mad Cow Theatre). Other credits include Mama Nadi in RUINED (Valencia College Theatre) and the Third Spirit in THE MAGIC FLUTE (Orlando Opera Company) and Elizabeth Keckley in CIVIL WAR VOICES (Orlando Repertory theatre and Dr. Phillips Centre). Sheryl is a voice and piano teacher who received her MME in Music from the University of Central Florida. Sheryl thanks God, her family and her acting teachers for their love and support. www.sherylcarbonell.com

CRANSTAN CUMBERBATCH (Bobo) is an award winning singer, actor, writer, director, producer, and U.S. Talent Olympic Medalist. In 2010, he won a Michael and LARY Award for best actor in a musical for his role in SMOKEY JOES CAFE and was nominated for a STAR and Jeff Norton Award for his roles as Jim in BIG RIVER (8 O’Clock Theatre), and as Benny in RENT (American Stage). Other stage credits include: Wolf in August Wilson’s TWO TRAINS RUNNING (American Stage); Malcolm in an adaptation of William Shakespeare’s MACBETH (Studio@620). Film credits include: If You Only Knew, Loaded Love, Loved, King Charles, No Harm Done, The Serious Student, Nothing Else Matters, Love & Context, and his most recent film, Art in the City. Cranstan currently serves as the Performing Arts Director for Pinellas County Job Corp and is the acting instructor with A.C.T. He is the CEO and Producing Director of his own entertainment company- AmaznCran’s Creative Works Inc.

FANNI GREEN* (Lena Younger) was last seen in American Stage’s JOE TURNER’S COME AND GONE. A St. Petersburg native, and member of the Theatre faculty at the University of South Florida (Tampa), she teaches acting, voice/speech/dialects, and directs. Stage credits include: Broadway’s MULE BONE, Off Broadway (NY Shakespeare Festival, NY Theatre Workshop, and Ensemble Studio Theatre). Regional: STEEL MAGNOLIAS (American Stage); YELLOWMAN (Jobsite Theatre), Film/Television credits include: THE OBJECT OF MY AFFECTION; DRUNKS; LAW AND ORDER.. Additional credits: Your Real Stories: DECADES OF WORK, ‘SAY WHAT’ play-reading series at the Studio @620; (director) IN THE BLOOD ;(dialect coach) Voodoo Macbeth) for Stageworks and the Studio @620, respectively. For USF Theatre she’s directed TROJAN WOMEN, WHAT THE HEART REMEMBERS (which she wrote), IN THE NEXT ROOM, THE ROAD WEEPS, THE WELL RUNS DRY, and GIDION’S KNOT. She and husband Gary Lemons have two kids, a nephew-son, and four grandchildren.

GAVIN HAWK* (Karl Lindner) was most recently seen as Robert Lyon in THE PITMEN PAINTERS at American Stage. Other Tampa Bay credits include THE FOREIGNER, ART, and BAREFOOT IN THE PARK (American Stage); and DR. JEKYLL AND MR. HYDE (freeFall Theatre). American Stage audiences might also know him as one half of the long-form improvisation duo HAWK AND WAYNE, now performing their latest show, KARAOKE-PROV, every first Sunday in the American Stage lobby. Gavin is a Professor of Theatre at Eckerd College, and earned his Diploma in Acting at The Juilliard School and his M.F.A. in Acting/Directing at California State University, Long Beach. He is a proud member of the Actors’ Equity Association. Special thanks to Eckerd College and the American Stage team for their continuing encouragement of his artistic endeavors, and his wonderful wife Peyton and his two amazing children for their love and support.

KIARA HINES (Beneatha Younger) is excited to be joining American Stage this winter! Kiara is a North Carolina native and a recent graduate of East Carolina University where she received a BFA in Musical Theatre. Although she has graced the stage often in North Carolina, this is Kiara’s American Stage debut! Some of her favorite past credits include: Little Inez in HAIRSPRAY (Crane River Theater) , Diana in LEND ME A TENOR (Loessin Playhouse) , and Patty Simcox in GREASE (Paramount Theatre). She would like to thank God and her family for their unending support! www.kiarahines.com

JAIDEN GRAY (Travis Younger) was most recently seen as Blakely in the 2018 Charles Dicken’s play A CHRISTMAS CAROL at the Straz Center for the Performing Arts, and will be featured as a supporting actor in the 2018 Disney’s PETER PAN at the Straz.

ELIJAH JORDAN (Travis Younger) has no previous stage performances. He has attended American Stages summer program for the past two years.

PATRICK A. JACKSON* (Joseph Asagai) is thrilled to be making his American Stage debut. Credits include: WHITE RABBIT RED RABBIT (Urbanite Theatre); ALICE WITH A TWIST, the title role in ANDROCLES AND THE LION, BUTLER, and THE FROG PRINCE (Florida Studio Theatre). Off stage, Patrick is the Education & Improv Associate at American Stage and a playwright. He has written works for FST’s Childrens Theatre Series and the DC Black Theatre Festival. He studied with the British American Drama Academy and is a proud alumnus of Morehouse College. Patrick would like to thank his family, friends, and frat brothers for their continued support. GOMAB. OASAASLLS. www.patrickajackson.com

ENOCH KING* (Walter Younger) is an Atlanta native and excited to be a part of this amazing production. Recent credits include: THE CHRISTIANS (Actor’s Express); A LESSON BEFORE DYING (Dominion Entertainment); THE COMEDY OF ERRORS and CANTERBURY TALES (Shakespeare Tavern); CONSTELLATIONS (Horizon Theatre). Film/TV credits include: Kevin(Probably) Saves The World; Party Boat; I Had A Dream; Ir/Reconcilable; Let’s Stay Together; The Watsons Go To Birmingham; Becky and Barry; Edgar Allan Poe’s Mystery Theatre; The Fighting Temptations; and Drumline. Last summer, he had the honor to play Emmett Till in ANNE AND EMMETT at the National Museum of African American History and Culture in DC. Giving thanks to GOD, my family, and friends for all their love and support.

DEE SELMORE (Mrs. Johnson) received her BA degree from Florida Agricultural & Mechanical University in Theatre Performance and an MS degree from Florida State University in Theatre. Dee has been seen in numerous professional productions including Deloris Van Cartier in SISTER ACT (Round Barn Theatre); Sofia in THE COLOR PURPLE (Westcoast Black Theatre Troupe); Calpurnia in TO KILL A MOCKINGBIRD (Mill Mountain Theatre); Mrs. Muller in DOUBT (Crane River Theatre); Motormouth Maybelle in HAIRSPRAY (Shenandoah Summer Music Theatre); and Cinderella/Olivia/Nurse in ZOMBIE SHAKESPEARE (Southern Shakespeare Co.). Dee has also performed several readings at the National Black Theatre Festival and performs with the Laughing Stock Company, A Musically Twisted Political Cabaret. Dee would like to send a thank you to American Stage and the cast and crew. Dee sends a special thank you to her mother and son for making her possible. “You are the light in my life.” “Thank you, Lord. Bless our show.” 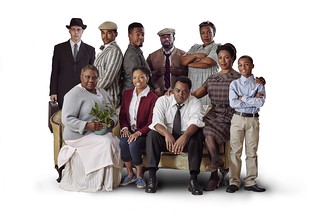 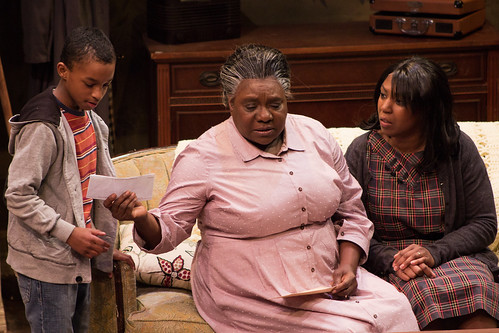 30 minutes prior to every performance

Arrive early and enjoy our interactive prologue series. The discussion will explore fascinating details about the play and the artists prior to select performances. FREE to A RAISIN IN THE SUN ticket holders

The perfect primer! Take a peek behind the curtain before the opening of A RAISIN IN THE SUN with this informative and entertaining presentation about the play, the playwright, and the American Stage artists who bring it all to life. Professor Emerita Dedee Aleccia will provide relevant details about the history and central themes of the play, while members of the artistic team will give an insider’s perspective on their process.

Great theatre inspires contemplation and challenges our assumptions while inviting us to come together for conversation and a deeper connection. From social and political hot-button issues to ethical dilemmas, American Stage’s Community Conversations dig deeper into the intriguing and sometimes provocative topics explored by our mainstage productions. Join a panel of local experts as they guide us through a lively discussion, and answer questions about the relevancy of the subject matter explored in the play.

A RAISIN IN THE SUN asks us to reflect on the history of integration in our country, the progress of our communities, and the American Dream. What does integration look like today in St Petersburg? Hear from local leaders who can speak to their vision and efforts toward diversity and progress.

Stick around immediately following select performances to talk with the cast and other audience members while the experience of the play is fresh! Ask questions about the play, the characters, and the process, plus respond to the story and ideas aroused by the production. Free for ticket holders to the performance.

*The chatback scheduled for 2/11 has been changed to a Community Conversation  moderated by cast member, Patrick A. Jackson following the performance at 6PM.

AFTER AUGUST: A RAISIN IN THE SUN – Tampa Bay Times

DREAMING OUT LOUD: AMERICAN STAGE’S: A RAISIN IN THE SUN – Creative Loafing

‘A RAISIN IN THE SUN’: STILL CHALLENGING THE AMERICAN PSYCHE – The Weekly Challenger