Tampa Bay Area Premiere
Directed by Benjamin T. Ismail
HUSTLE. OUT LOUD. City Hall is demanding more than his signature: the landlord wants him out, the dog is a nuisance and the liquor store is closed. Ex-cop & widower Walter “Pops” Washington and his recently paroled son Junior, have spent a lifetime living between Riverside and crazy. When the struggle to hold on to one of the last great rent-stabilized apartments on Riverside Drive collides with old wounds and sketchy new houseguests, Pops decides to take matters into his own hands with a final ultimatum, while everyone else hustles to get what they think they deserve.

“Somewhere south of cozy and north of dangerous,
west of sitcom and due east of tragedy.”
– The New York Times

L. PETER CALLENDER*
(POPS)
L. Peter is thrilled to be making his American Stage debut as an actor having directed three critically acclaimed and award-winning productions (JITNEY, JOE TURNER’S COME & GONE and A RAISIN IN THE SUN) over the past three years. He will be returning in January to direct Dominique Morisseau’s PIPELINE. Mr Callender is artistic director of African-American Shakespeare Company in San Francisco, has performed in over 20 Shakespeare plays, most recently Richard in RICHARD III and directed five. He has performed coast to coast over the years in over 15 regional theaters. Some favorite roles include: Caliban in THE TEMPEST, Leontes in THE WINTER’S TALE, Simon in THE WHIPPING MAN, Colonel Pickering in PYGMALION, Roebuck Ramsden in MAN AND SUPERMAN, Adolphus Cusins in MAJOR BARBARA, Sam in ‘MASTER HAROLD’…and the Boys, Mr M in MY CHILDREN! MY AFRICA!, Robert Mugabe in BREAKFAST WITH MUGABE and Becker in JITNEY. Peter has appeared on Broadway in PRELUDE TO A KISS (Helen Hayes Theater) and off-Broadway in BLACK EAGLES (Manhattan Theater Club) and is a proud member of Actors Equity Association. More on Mr Callender can be found on his website lpetercallender.com.

VICKIE DAIGNAULT*
(O’CONNOR)
Vickie is happy to be back at American Stage where she was last seen as Jean in GOOD PEOPLE. Other regional theatre credits include: WOMEN LAUGHING ALONE WITH SALAD (Urbanite Theatre); the solo show THE YEAR OF MAGICAL THINKING (Stageworks Theatre); THE DIXIE SWIM CLUB with Morgan Fairchild (Alhambra Theatre & Dining); HATS!, THE MUSICAL with Melissa Manchester (The Royal George); TIME STEP, ON THE BRINK, DAUGHTER OF BEIJING (The Theatre Building); BIG RIVER, KINDERTRANSPORT, TO KILL A MOCKINGBIRD (Apple Tree Theatre); among others. Additionally, she can be seen in the films Epiphany; Last of the Dog Days; Alien Hand; and The Serious Student. Vickie serves as the Intern Program Director of DirectorsLabChicago, is a member of Actors’ Equity Association and SAG/AFTRA, and has been active on a number of Equity’s committees. Many thanks to Ben, Stephanie, Jim, and all the American Stage staff!

ENOCH KING*
(JUNIOR)
Enoch is an Atlanta native and is very excited to return to American Stage! He was last seen here as Walter Lee in A RAISIN IN THE SUN. Recent regional credits include: THE MOUNTAINTOP (Heritage Theatre Festival); CANTERBURY TALES (Shakespeare Tavern); THE CHRISTIANS (Actor’s Express); A LESSON BEFORE DYING (Dominion Entertainment); THE COMEDY OF ERRORS and CANTERBURY TALES (Shakespeare Tavern); CONSTELLATIONS (Horizon Theatre). Film/TV credits include: Kevin (Probably) Saves The World; Party Boat; I Had A Dream; Ir/Reconcilable; Let’s Stay Together; The Watsons Go To Birmingham; Becky and Barry; Edgar Allan Poe’s Mystery Theatre; The Fighting Temptations; and Drumline. This summer, he had the honor to play Emmett Till in ANNE AND EMMETT at the DeLaMar Theater in Amsterdam. Grateful to GOD, my family, and friends for all their love and support.

SARA OLIVA*
(CHURCH LADY)
Sara is thrilled to be making her American Stage debut. She was recently seen as Church Lady in BETWEEN RIVERSIDE AND CRAZY at GableStage. Other Florida credits include: The Maltz Jupiter Theatre, Alhambra Theater, Orlando Fringe, Orlando Shakespeare Playfest and Mad Cow Theatre. Her Chicago credits include: Northlight Theater, The Lyric Opera of Chicago, Bailiwick Repertory, Mary-Arrchie Theater, Lifeline Theater, The Artistic Home, and others. Sara’s New York performances include: Shakespeare in the Parking Lot’s CORIOLANUS (NY Times Critics Pick) and Vagabond Productions’ (Belgium) American premiere of MISS JULIE. She also performed at The Drilling Company, HERE Arts Center, Dixon Place, Fringe NYC, The Internationalists and others. Regional appearances include The Berkshire Theater Group and Double Edge Theater. She received her M.F.A in acting from Brandeis University. Love and thanks to her mother, as always. saraoliva.com

VANESA RENDON
(LULU)
Vanesa is excited to be joining American Stage for the first time for this production. A native New Yorker and Circle in the Square Theatre School alum, Vanesa was introduced to Guirgis’ work early on and has always looked forward to the opportunity to bring his characters to life with authenticity and truthfulness. Her most recent credits include THE LAST DAYS OF JUDAS ISCARIOT (Duende Theatre Group) and can be seen on DOG PARK an upcoming independent series. She would like to express endless gratitude to her family and friends for their continued support and all the wonderful artists who have been part of her journey.

RICKY WAYNE*
(LT. CARO)
Ricky is thrilled to be back on the mainstage at his artistic home where, for the past 10 seasons, on the first Sunday of the month, Ricky has been performing as 1/2 of the improv comedy duo Hawk & Wayne and is the co-founder of American Stage Improv. Their new show #AskUsAnythingLive started in September. American Stage audiences may remember him as the title role in TARTUFFE, Marc from ART and Carl from OPUS. Other regional theater credits include Ricky Roma in GLENGARRY GLEN ROSS and Charlie Fox in SPEED-THE-PLOW (The Heather); and Wayne in CONGRATULATIONS, JOE! (A Simple Theatre). Television credits include recurring roles in The Walking Dead; Outsiders; Homeland; Chicago Pd/Fire; and Bloodline. He is a proud member of Actors’ Equity Association and SAG-AFTRA. Special thanks to Traci.

DONOVAN WHITNEY
(OSWALDO)
Donovan hails from Indianapolis, IN and is beyond thrilled to work with such a decorated team. He is also a 2018-19 Acting & Production Apprentice with American Stage. Recent theatre credits include: PAPER SWORDS: A MUSICAL (2018 Indianapolis Fringe Festival); PROWESS (Storefront Theatre of Indianapolis); TAMING OF THE SHREW (Catalyst Repertory Theatre); MUCH ADO ABOUT NOTHING (Khaos Company Theatre); 1984 (NoExit Performance); ROSENCRANTZ & GUILDENSTERN ARE DEAD (Wabash College); THE ALIENS (Wabash College). He graduated from Wabash College with a BA in Political Science and Theatre (double major). He would like to thank his family and friends back home for all their love and support, and also American Stage for this incredible opportunity. 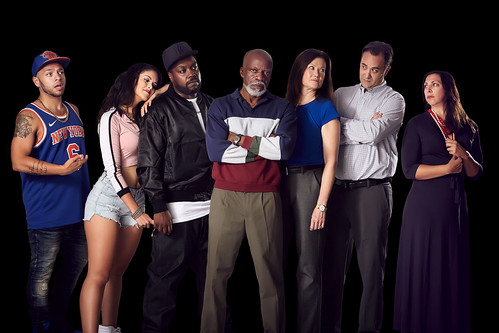 Arrive early and enjoy our interactive prologue series. The discussion will explore fascinating details about the play and the artists prior to select performances. Free to ticket holders to the performance.

Sunday September 23 | 1PM
The perfect primer! Take a peek behind the curtain before each production opening with this informative and entertaining presentation about the play, the playwright, and the American Stage artists who bring it all to life. Professor Emerita Dedee Aleccia will provide relevant details about the history and central themes of the play, while members of the artistic team will give an insider’s perspective on their process.

Great theatre inspires contemplation and challenges our assumptions while inviting us to come together in conversation. From timely social and political issues to timeless ethical dilemmas, American Stage’s Community Conversations dig deeper into the intriguing and sometimes provocative themes explored in our productions. Join a panel of local experts as they guide us through a lively discussion.

Thursday October 11, Sundays October 14 & 21
Stick around immediately following select performances to talk with the cast and other audience members while the experience of the play is fresh! Ask questions about the play, the characters, and the process, plus respond to the story and ideas aroused by the production. Free for ticket holders to the performance.

“A Play for Our Times…Impeccable…A piping hot slice of life.”-Julie Garisto, Creative Pinellas