SATCHMO AT THE WALDORF
By Terry Teachout

A one-man, three-character play in which the same actor portrays Louis Armstrong, the greatest of all jazz trumpeters; Joe Glaser, his white manager; and Miles Davis, who admired Armstrong’s playing but disliked his onstage manner. It takes place in 1971 in a dressing room backstage at the Empire Room of New York’s Waldorf-Astoria Hotel, where Armstrong performed in public for the last time four months before his death. Reminiscing into a tape recorder about his life and work, Armstrong seeks to come to terms with his long standing relationship with Glaser, whom he once loved like a father but now believes to have betrayed him.

Advisory: Suitable for ages 14 and up. Adult language and situations are included in this production.

Be the first to see this production and join us on Friday, February 19 for our Premiere members-only opening performance inclusive of a pre-show virtual gathering with artists prior to the play. Members get to enjoy all-access to special shows, events and classes all season long. Learn more at americanstage.org/membership

Thanks to Our Sponsors:

Ted Lange (Director) personifies the Renaissance Man Theatre Award received from the NAACP. A graduate of London’s Royal Academy of Dramatic Arts, Lange’s career gained worldwide recognition as a gifted actor of stage and screen, revered director, and prolific writer.  Lange penned twenty-five plays including, his historical trilogy, George Washington’s Boy, The Journals of Osborne P. Anderson, and Lady Patriot, as well as Four Queens – No Trump, a comedy which played to rave reviews, and won NAACP Best Play. He directed the Shakespearean plays, Othello, Richard the III, and Hamlet. He wrote Born a Unicorn, a musical about Black Shakespearean actor Ira Aldridge. His prequel play of Othello, The Cause My Soul, won Best play of 2017. Lange garnered worldwide fame for his portrayal of Isaac from the Love Boat.  He has directed a vast number of TV comedies as well as the feature film, For Love of Amy.

L. Peter Callender* (Louis Armstrong, Joe Glaser and Miles Davis), a proud member of Actors Equity Association, happily returns to American Stage for the sixth season. He recently played the title character in the company’s “Othello”, directed “Twelfth Night” during their Virtual Stories series and directed Dominique Morisseau’s “Skeleton Crew” for American Stage during their 19-20 season (5 Tampa Bay Awards, including Outstanding Director). Also at American Stage, he played Walter “Pops” Washington in “Between Riverside and Crazy” (Tampa Bay Award, Best Actor) to begin their 18-19 season, and he directed the critically acclaimed production of “A Raisin in the Sun,” which followed his direction of August Wilson’s “Jitney,” and “Joe Turner’s Come and Gone,” accumulating 10 Tampa Bay Award nominations and winning 6, including Outstanding Director for “Jitney” and “Joe Turner’s Come and Gone.” Mr. Callender is Artistic Director of African-American Shakespeare Company in San Francisco. As an actor, Mr. Callender has performed in over 23 Shakespeare plays, in August Wilson’s “King Hedley II” (Hedley), “Seven Guitars” (Red Carter), and “Radio Golf (Sterling), Athol Fugards’ ” ‘Master Harold’…and the Boys” (Sam), “Sizwe Banzi is Dead” (John), “My Children! My Africa!” (Mr M) and several others in over 15 regional theaters coast to coast and on Broadway in “Prelude to a Kiss.” Read more on his site at www.lpetercallender.com 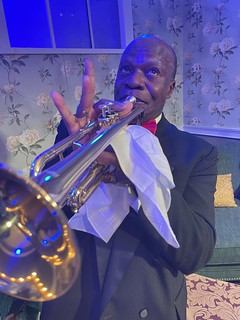 “…a wonderful piece of art…You would be hard-pressed to find another virtual production as fine as this.” – Drew Eberhard, Broadway World

“Actor and director L. Peter Callender is a joy… fun – and somewhat magical — to watch.”  – J.A. Jones, The Weekly Challenger