Tampa Bay Premiere
It’s 2008, and one of the last auto plants in Detroit is on shaky ground. The remaining factory workers are living paycheck-to-paycheck and now each of the workers must navigate the possibility of foreclosure. As power dynamics shift and they are pushed to the limits of survival, the line between blue collar and white collar gets blurred.  With moments of heartbreak and humor, SKELETON CREW is a beautiful homage to the American blue collar worker.

“Like Lorraine Hansberry and August Wilson before her, Morisseau creates characters who don’t merely speak, they sing..”  – TheatreMania

L. Peter Callender (Director),  a proud member of Actors Equity Association, happily returns to American Stage as director of SKELETON CREW. He recently directed Morisseau’s PIPELINE for American Stage, after playing Walter “Pops” Washington in BETWEEN RIVERSIDE AND CRAZY (Tampa Bay Award, Best Actor), to begin this 2018/19 season. Also, at American Stage, he directed the critically acclaimed production of A RAISIN IN THE SUN, which followed his direction of August Wilson’s JOE TURNER’S COME & GONE, and JITNEY, accumulating 10 Tampa Bay Award nominations and winning 6, including Outstanding Director for JITNEY and JOE TURNER. Mr. Callender is Artistic Director of African-American Shakespeare Company in San Francisco. Other directing credits include, WE ARE PROUD TO PRESENT… at San Jose Stage Company, SAFE HOUSE at Aurora Theatre Company, August Wilson’s FENCES for Solano College at Harbor Theater in Fairfield, Ca., and GILDED SIX BITS by Zora Neale Hurston for Word For Word in San Francisco and Paris, France. As an actor, Mr. Callender has performed in over 23 Shakespeare plays, in August Wilson’s KING HEDLEY II (Hedley), SEVEN GUITARS (Red Carter), and RADIO GOLF (Sterling), Athol Fugards’ MASTER HAROLD..and the Boys (Sam), SIZWE BANZI IS DEAD (John), MY CHILDREN! MY AFRICA! (Mr M) and several others in over 15 regional theaters coast to coast and on Broadway in PRELUDE TO A KISS. Read more on his site at www.lpetercallender.com

Rasell Holt* (Dez) was most recently seen in ROMEO+JULIET at Chicago Shakespeare Theatre. Other credits include TWELFTH NIGHT and SHE STOOPS TO CONQUER (American Players Theatre); DRACULA (Actors Theatre of Louisville); A STORY TOLD IN SEVEN FIGHTS (The Neo-Futurists); and THE HAIRY APE (Oracle Productions); including understudy work at Steppenwolf Theatre and Lookingglass Theatre. TV/FILM credits include “Chicago P.D.” on NBC and “Drive Slow” by Terrence Thompson. He received his B.F.A from the University of Wisconsin-Whitewater and continued training with the Professional Training Company at The Actors Theatre of Louisville and the 2019 Apprenticeship at American Players Theatre. For Jim Butchart.

Enoch Armando King* (Reggie) is excited to be back at American Stage! He was previously seen here in BETWEEN RIVERSIDE AND CRAZY and A RAISIN IN THE SUN. His recent credits include: TUNA CHRISTMAS (G.E.T.), PARADISE BLUE (True Colors Theatre), HANDS OF COLOR (Synchronicity Theatre- Suzi Bass Award for Best World Premiere), SKELETON CREW(True Colors Theatre), A CHRISTMAS CAROL (Shakespeare Tavern), THE MOUNTAINTOP (Heritage Theatre Festival-Charlottesville,VA.), ANNE AND EMMETT (Amsterdam, VA., NY, NC.), THE CHRISTIANS (Suzi Bass Award for Best Supporting Actor) (Actors Express). Next up for Enoch is THE LIGHT at Horizon Theatre. Thanks to the wonderful cast, amazing crew and my family and friends for continued love and support. 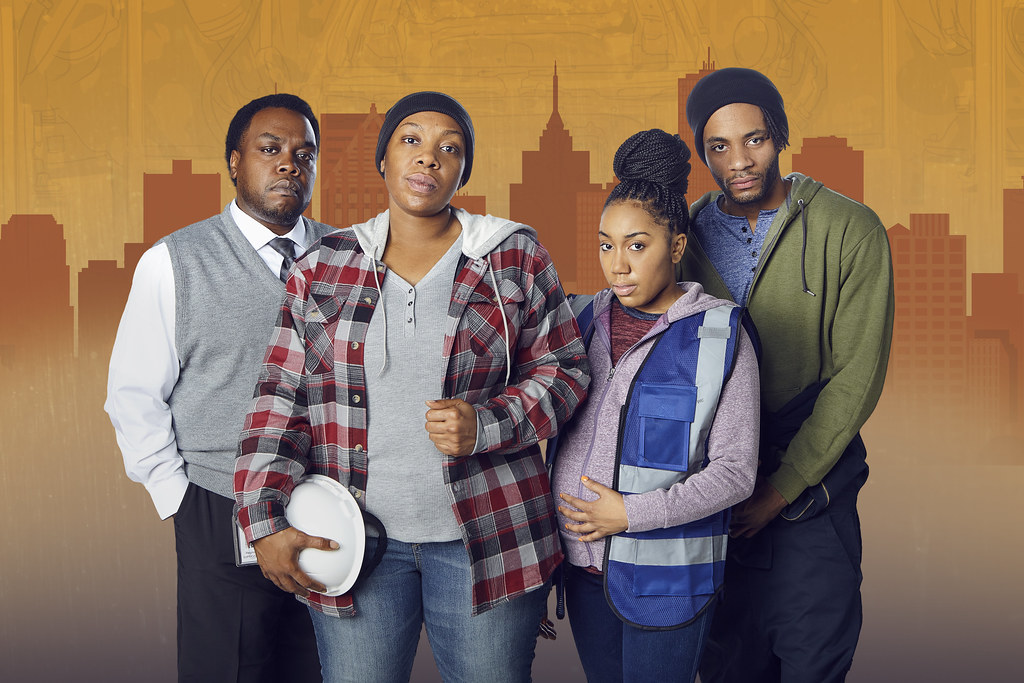 A performance primer! Join us 30 minutes before the performance and enrich your play-going experience with an engaging discussion that explores fascinating details about the play and the artists.

Take a peek behind the curtain before the opening of each production with a presentation by Professor Emerita Dedee Aleccia. She provides insights into the history and central themes of the play, as well as a discussion with members of the creative team who provide an insider’s perspective on their process.

January 30, February 2, 9, & 16
Immediately following select performances, chat with the artists and other audience members while the experience of the play is fresh! Ask questions about the play, the characters, and the process, and respond to the story and ideas aroused by the production.